This summer I visited Ireland on holiday. Part of the fun of going over was to set up a simplex "parrot" repeater on the PMR 446 MHz band in the Galway / Clare area with local radio enthusiast Luke 29ER139.

The principle of the simplex repeater is that it receives a transmission, digitally records it and then automatically retransmits that recorded message. Hence it's commonly described term: the parrot repeater. The useful thing about the simplex repeater is that it can be connected to most transceivers on a single frequency. No need for a duplex (dual frequency) facility. By recording and repeating a transmitted message with a repeater station set up on high ground, communication range can be extended. The only problem with this system is that you have to wait for the retransmission to finish to be able to reply. There is a time limit with the parrot, usually no longer than 30 seconds.


Very popular this days are the Pan-European licence-exempt PMR446 walkie talkies. Being low power devices the range is small, several 100 metres in built up areas to several kms in clear countryside. Having a simplex repeater allows these walkie talkies range to be extended over a greater area. Luke and I decided this was the best cost effective repeater system for his local area.

A Radio-Tone simplex repeater controller (SRC) was purchased online from eBay and sent over from Hongkong and taken over to Ireland. Luke supplied a Puxing 777 handheld 5 watt UHF transceiver and is easy to set up with the SRC. A lead acid 12 volt battery was chosen to power the repeater with a trickle charger off the mains electricity. The SRC has an internal rechargeable battery and that was removed, as the the unit can run on 12 volts. Unfortunately the manufacturers of the 777 doesn't recommend voltages higher than 8 volts as it uses a 7.2 volt battery pack. So I had to make a 7.2 volt regulator using kitchen table technology. Going through Luke's components and scrape pile of old radios, I managed to build a L200C regulator circuit. This was all mounted in a plastic tub ready for action. For an aerial system we decided upon a Nagoya NL770 mobile antenna, as it's a 5/8wave over 5/8wave colinear with some dB gain, light weight, and has a low SWR on 446 MHz.

﻿
Testing the repeater on a dummy load. To the left is the regulator,
right ﻿is the 777 and at the bottom is the SRC. 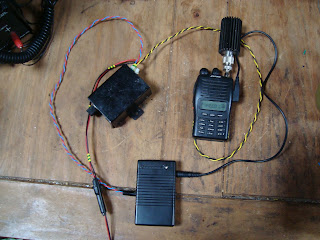 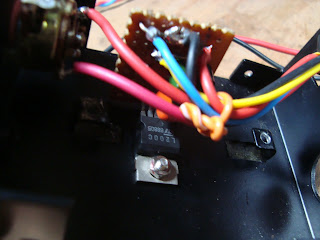 The next day we drove to a nearby high spot which is about 900 feet asl to install the repeater in a shed (with permission of course). We fixed the antenna on a plastic drainpipe and mounted it on top of the shed. Connected several metres of mini RG8 coax cable between the repeater and antenna, and did the final checks. All was working fine. 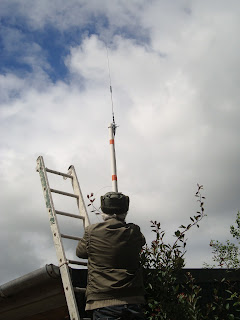 Overall the repeater has a good and reliable 20 plus km range, through quite a hilly area with a wide coverage of forestry. We were pleased with the range as UHF signals don't work well in wooded areas. So now the locals on the border areas of county's Clare and Galway a free community repeater on PMR ch 7 no tone (no ctcss at the moment).

I recently spoke on the phone to Luke the "repeater manager", and it's still working. The only problem is that the cheaper type of PMR walkie talkies have poor transmit audio and don't reproduce well when repeated. Next time I'm visiting Ireland, I'll check the audio settings, replace the coax with a higher quality coax as mini RG8 is a bit lossy at UHF, replace the antenna with a higher gain model, and programme the tone squelch if there has been any abuse.

Dave Sowden
Been interested in radio & electronics since I was a child. Have a keen interest in CB, Ham and PMR466 radio systems. My Amateur Radio callsign is G7OPC but on the ol' Chicken Box (CB radio) I'm Dave the Pixie - 26CT052. To me radio comms is a fascinating hobby, but not to be taken too seriously. In this blog, I will be exploring possibilities of simple and effective radio comms which shouldn't cost a fortune, and any radio-related adventures, experiences and nostalgia.